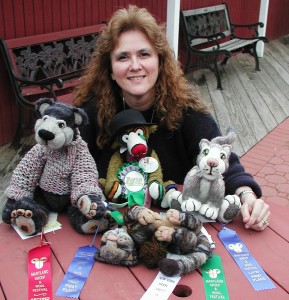 Like many of you, I was drawn into the teddy bear world by some special bears in my life.

Some of these special bears were definitely more than I could afford as they were made of mohair.  As with many of my crafts and interests, I decided to try and make my own teddy bear to help me “get over” my desire.  I made a jointed bear out of some plush I found, and discovered that instead of the bears getting out of my system they had found their way in. I had found a new passion…creating teddy bears.

So it began in 1986.  From my home in Long Island , NY, I designed my own patterns and went out and purchased that wonderful mohair I loved, and began making teddies for the friends and acquaintances that had asked.  Before I knew it I had created a monster – I had no time for my “full time” job and no time for my part time job at night as a self defense instructor.

After doing some doll and teddy bear collectible shows I found myself producing and creating mohair teddies for the Toy Fair in Manhattan at the Javits Center.  This was the beginning of Irene Heckel Originals (originally known as “Grin & Bear It”).

Since then I have been one of the first artists to do an angled joint for the head ( I still use this today)  (Teddy Bear Review May/June 1995), introduce the use of the air brush on teddy bears (Teddy Bear & Friends Feb 1999 and Teddy Bear Scene July/Aug 1999 in England).

Over the years I have been very grateful to have been nominated and won a number of awards for several of my “friends” including nominations in the 1999/2000, the 2003/2004 and the 2005/2006 TED Worldwide Competition that is produced by Bar Report (Bear Report) Magazine in Germany. 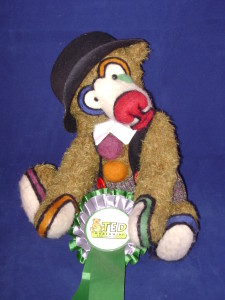 The year 2002 also brought something very special into my art life – NEEDLE FELTING !! Fittingly I discovered this very fascinating and still very unknown (at the time) fiber art form at a teddy bear rally in Massachusetts.  I was in love form the first “poke”.  At the time there was very little info on this wonderful art, so I found what I could and taught myself by trial and error.  I also spent alot of time educating the people I came in contact with about needle felting.  Most of them were amazed and wanted to learn more, so I began to teach classes.  I also found ways to merge my 2 art loves – teddy bears and needle felting and that opened more doors.

In 2003 I was fortunate to win a first place award for my Cheshire Cat and in 2004 two 1st and 2nd place for several needle felted pieces in Rhinebeck, NY at the Sheep and Wool Festival.  2005 brought a first place for my “Spirit” elf at the Patchogue, NY Doll Fanciers Show in January and a second place at the Maryland Sheep and Wool Festival in May. Currently, I am putting the finishing touches on my needle felting book and expanding my horizons in the fiber art arena. I have also produced a needle felting instructional DVD (the first of 3), which is a step by step guide to creating sculptures and includes instruction in techniques and specific projects.

In 2014, my husband, and fur family relocated to Western North Carolina in the Asheville area.  This new chapter in my life has given me some great opportunities as both an artist and as an instructor. I have made some wonderful friends here and have been given the chance to exhibit, teach, and create. I have been fortunate in recognition here also, with some of my newer pieces receiving awards and recognition.

I hope to be able in the near future to exhibit at more teddy bear shows and fiber arts shows, galleries and demonstrations.  I love to meet with and speak directly to the collectors, and potential students, which is something that I treasure, since it is only with the support of these wonderful people that I can continue the work that is a large part of my life. Hope to see you at a show or needle felting workshop soon!